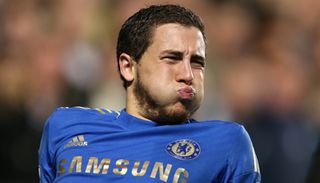 The pair were injured in Saturday's Premier League win at Aston Villa. Captain Terry is desperate to prove his fitness after missing last season's Champions League final win over Bayern Munich through suspension.

"Hazard will not be available and, with John, we still have to wait to see how he feels," Benitez told a news conference at the Amsterdam Arena on Tuesday.

"It's not the best injury but tomorrow we will check it with the medical staff and then we will decide on John."

Belgian international Hazard limped off in the 2-1 victory over Villa while Terry was carried off on a stretcher after twisting his ankle in the second half.

In Hazard's absence, Frank Lampard is likely to play alongside David Luiz as the two midfield holding players with Brazilian Ramires pushed forward to join compatriot Oscar and Juan Mata in a trio playing just behind Fernando Torres.

Torres is certain to feature because Demba Ba, signed from Newcastle United in January, is cup-tied.

Benitez will leave the club after Sunday's final Premier League game of the season at home to Everton, with media reports suggesting Jose Mourinho is to quit Real Madrid for a second stint in charge at Chelsea.

The Spaniard, who took over when Champions League-winning coach Roberto Di Matteo was sacked in November, said he would walk away a proud man if Chelsea could lift the Europa League trophy for the first time in their history.

"We have been playing two games per week all season, sometimes three, and we have had to deal with a small squad, injuries and suspensions," explained Benitez.

"Every game was difficult but this is the final and I want to win. If we can do it I will be really proud because we have worked so hard in difficult circumstances.

"You have to give credit to all the people involved, the staff and the players."

Chelsea are regarded as favourites to beat 1961 and 1962 European champions Benfica but Benitez said the final was too tight to call.

"Benfica are a good team and they have experience in Europe," added the Spaniard. "In a final it is 50/50 and we will see what happens.

Benitez smiled from ear to ear when he recalled how he masterminded former club Liverpool's spectacular fightback from 3-0 down to beat AC Milan on penalties in the memorable 2005 Champions League final.

"A European final is massive," he said. "Maybe you can score an early goal and change the game or concede three and have to change at half-time.

"You have to have confidence and belief you can do well. Your team has to have the same feeling and you have to see what happens but it depends on