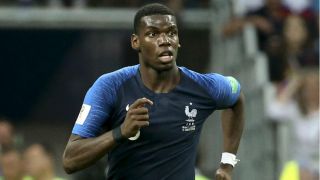 Manchester United duo Paul Pogba and Anthony Martial have pulled out of France's squad for the games against Netherlands and Uruguay.

Pogba missed United's 3-1 defeat to Manchester City on Sunday with a thigh injury, while Martial – who scored his side's goal from the penalty spot – has sustained a groin problem.

Both players reported for duty on Monday at France's Clairefontaine training base, but after consultations with Les Bleus' medial staff the decision was made to send them back to Manchester for further treatment.

Personnel update: and have withdrawn from the squad through injury, so and have been called up to replace them. November 12, 2018

Martial has been in fine form recently, scoring six goals in his last seven games for United.

France can win their Nations League group with a draw against Netherlands in Amsterdam on Friday, with their friendly versus Uruguay in Paris four days later.