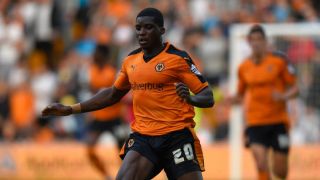 Liverpool have recalled winger Sheyi Ojo from his loan at Championship side Wolves following a string of injuries picked up against Stoke City in the League Cup.

Philippe Coutinho, Dejan Lovren and Kolo Toure all joined a lengthy injury list during Liverpool's 1-0 win over Stoke at the Britannia Stadium on Tuesday as Jordon Ibe's strike ensured a first-leg advantage.

The likes of Jordan Henderson, Danny Ings and Daniel Sturridge also remain unavailable to Jurgen Klopp, who has suggested Liverpool may need to act in the transfer window this month.

With new signing Marko Grujic to be loaned back to Red Star Belgrade for the remainder of the season, Klopp has recalled 18-year-old Ojo from his spell at Molineux.

Ojo - yet to feature for Liverpool in a competitive fixture - made 19 appearances for Kenny Jackett's side, scoring three times, following his loan move in August.

The young winger agreed a new five-year deal at Anfield on the same day he joined Wolves and could feature in Liverpool's squad for Friday's FA Cup third-round clash with Exeter City at St James Park.