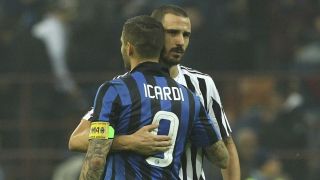 Inter and Juventus will outlast their Scudetto rivals and compete to win Serie A this season, according to Arrigo Sacchi.

Sacchi won Serie A and two European Cups with AC Milan as well as leading Italy to the World Cup final.

The 69-year-old, who has been impressed by the work of Inter coach Roberto Mancini and his Juve counterpart Massimiliano Allegri, feels the two clubs have the power to pull away during the second half of the campaign.

"Inter and Juve have the best chances and history suggests that," he told La Gazzetta dello Sport.

"They have almost won 50 titles, while Fiorentina and Napoli are at four. They have spent the most and in the long run that matters.

"Juve have two advantages in that they have a unique history and great management. Antonio Conte did some great work and Massimiliano Allegri is continuing it.

"He made tough decisions and was embraced by a tough environment that treated him like an invader," he added, referring to the scepticism of many Juve supporters at the appointment of former Milan coach Allegri in 2014.

"Although they are not playing as well as Napoli or Fiorentina, they have real quality in the group. They are a scary side.

"I must give credit to Mancini because he knows how to handle a group and because he has grown tactically. He loves beautiful football, I know that, and he knows that is achieved by playing well.

"For example against Empoli they were dominated even though it should have been the other way around. I am certain that he will work on that in order to improve their quality. Mancio knows what he is doing."

Both sides are in action on Sunday as Inter host Sassuolo, while Juventus are away to Sampdoria.