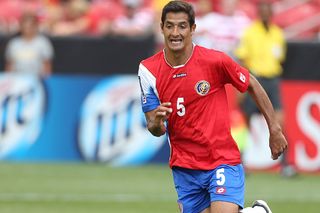 The Costa Ricans were guilty of some wasteful finishing despite dominating the first half, with the sides going to the break scoreless at the Estadio Marcos Henriquez on Wednesday.

But Jorge Luis Pinto's side showed their class in the second half as a brace from AIK's Celso Borges and late goals from Pablo Herrera and Mauricio Castillo completed the rout.

Borges kicked things off three minutes after the break when he was sent clear in the box and finished clinically with a low drive inside the far post.

The crafty midfielder added a second 20 minutes from time before the visitors' dominance was rewarded with Herrera (76th) and Castillo (86th) getting in on the act before full-time.

The result goes someway to making up for Costa Rica's disappointing showing at the recent CONCACAF Gold Cup, where they were eliminated at the quarter-final stage by Honduras.

Currently second in CONCACAF qualifying for next year's World Cup, Pinto's troops will play two crucial qualifiers next month which will go a long way to determining if they get to Brazil.

They host group leaders USA on September 7 before going on the road four days later to take on the winless Jamaica.