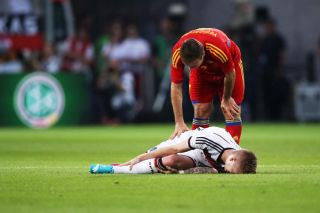 A flurry of late goals - including a header from Miroslav Klose that saw the striker surpass Gerd Muller as Germany's all-time record scorer - enabled Joachim Low's men to record a comfortable victory in their final warm-up game before heading to Brazil.

However, it is the injury to Reus that will dominate the headlines after the Borussia Dortmund forward was carried from the pitch late in the first half in visible distress after appearing to twist his left ankle.

Germany subsequently took the lead through Andre Schurrle, but were pegged back by a penalty from Henrikh Mkhitaryan.

Armenia's equaliser came with 21 minutes remaining, yet the hosts subsequently pulled clear with further goals from Lukas Podolski, Benedikt Howedes and Klose before Mario Gotze rounded off the scoring with a late brace.

Germany can expect stiffer opposition in their World Cup opener against Portugal on June 16, but will surely take heart from the way they finished Friday's match at the Coface Arena in Mainz.

Armenia started brightly, but almost fell behind when Hrayr Mkoyan cleared an effort from Reus off the line after the 25-year-old had been slid through by Thomas Muller.

Despite dictating play for much of the first half, Germany struggled to find a way through the Armenian defence.

Jerome Boateng headed wide from a corner before Reus was denied by a strong save from Roman Berezovsky.

The first ended then on a sour note for Low's men, as Reus was helped from the field in some pain following a tackle from Artur Yedigaryan.

Reus' replacement Podolski had a hand in Germany's opener as Schurrle found the net seven minutes into the second half.

Podolski broke free down the left-hand side, before teeing up Chelsea forward Schurrle with a pinpoint low cross.

Boateng lashed a fierce effort narrowly over the crossbar and Mesut Ozil struck the post as Germany pushed for a second, but Armenia still carried a threat.

And the underdogs drew level in the 69th minute when substitute Kevin Grosskreutz tripped Gevorg Ghazaryan in the area, allowing Dortmund team-mate Mkhitaryan to coolly slot past another club colleague, Roman Weidenfeller, from the penalty spot.

Remarkably, Germany responded by firing in five goals in the final 18 minutes.

Podolski rifled a fine finish into the bottom corner from Ozil's neat pass, and Howedes swiftly made it 3-1 by converting a rebound after Berezovsky's brilliant inital save from his header.

Klose then grabbed his landmark 69th international goal with a diving header from another excellent cross from Podolski.

And there was still time for Gotze to capitalise on further slack defending with two late strikes.