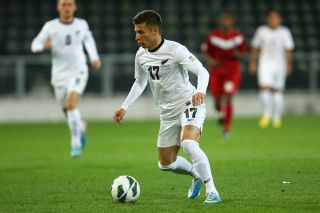 The game was New Zealand's last ahead of their FIFA World Cup play-off matches against Mexico, who finished fourth in CONCACAF qualifying.

For Trinidad and Tobago, the game was the first home match under new coach Stephen Hart who took over the side in June while New Zealand were without several of their stars.

Aaron Clapham and Kosta Barbarouses went close with chances for the All Whites, but they were unable to finish them off.

Of more significance was the confirmation that, as expected, New Zealand's play-off will be against Mexico.

New Zealand will travel to Mexico on November 14 for the first game and return to play the second in Wellington six days later.

The fourth CONCACAF berth was only decided after games between Mexico and Costa Rica and the United States and Panama.

By beating Panama 3-2, the United States allowed Mexico to claim fourth place although they lost 2-1 to Costa Rica.