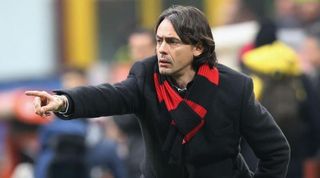 Milan offered little in attack once again, with only Mattia Destro and Keisuke Honda able to threaten the Chievo goal.

Honda's powerful effort early in the second half thudded into the crossbar, but Milan lacked creativity and were thankful to goalkeeper Diego Lopez for earning them a point.

Under-pressure Inzaghi was able to find some positives, but rued the loss of Nigel de Jong and Riccardo Montolivo to injury.

"I thought we tried to play and certainly did better in the second half," he told Sky Sport Italia.

"We need to be more clinical in attack, make the right final pass and take our chances, because it’s not easy to play against a Chievo side who put everyone in defence.

"I look at the glass half-full, it's our second consecutive clean sheet, but then once again we lost two important players to injury and wasted scoring opportunities.

"I believe we've improved in our possession over the last two games, but we didn't score and that's the real regret today."