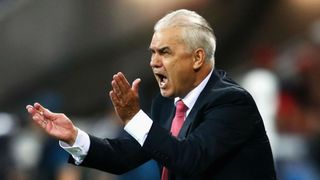 Romania's beaten coach Anghel Iordanesu was drawn into an ugly war of words with a journalist after his team were knocked out of Euro 2016 by Albania.

The tournament newcomers won 1-0 at Stade de Lyon on Monday, consigning Romania to bottom spot in Group A, ruining their chances of reaching the knock-out stages of a major finals for the first time since Euro 2000.

Facing the media after the game, Iordanesu, voted Romania's Coach of the Century, was accused of orchestrating "the shame of the century", as a member of the press attacked the manager's team selection and questioned his future.

And the 66-year-old, despite the disappointment of the unwelcome result, had no intention of backing down.

"I recognise you as a journalist who always destroys the imagination of football," he said.

"I'm not sure you've done [anything] constructive in your life.

"The shame of the century? Let the Romanian press judge me and ask the Romanian Football Association president.

"As far as the football is concerned, a loss is a loss and I'm really sorry for what we've done."

Albania won the day off the field as well as on it, with their fanatical followers drowning out those Romanians who travelled to cheer the team on in France.

Iordanescu claimed he does not regret emphasising the importance of the match to his players, perhaps overburdening them with expectation.

"Qualification would have given a deserved reward for this generation of players. They did everything they could to qualify."

And he repeated his criticism of UEFA's decision to move the pre-match training session to Stade de Gerland as a precaution after heavy recent rain in Lyon.

"These conditions forced the team to eat at ten thirty, that's far from normal for a professional team about to play an important match."