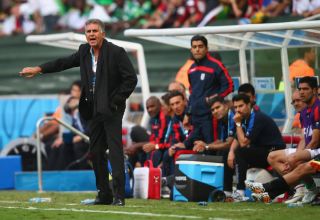 The Asian nation turned in a disciplined defensive display to frustrate their opponents and claim a share of the spoils in a goalless draw in Curitiba on Monday.

And Queiroz revealed that his "realistic" gameplan had paid off as Iran got off the mark in Group F.

"I'm very happy but it was a very difficult," he said. "We played against a great team.

"It was necessary to play a realistic game. We fought for every ball, every space and played 90 minutes with one thing in our mind.

"It was a game where I need to praise my players - they need to be congratulated."

Queiroz's focus now switches to Saturday's clash with group leaders Argentina, who opened their campaign with a 2-1 win over Bosnia-Herzegovina on Sunday.

"Now it is Argentina," he added. "The most important thing is that everything remains open for us."