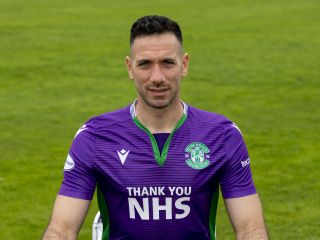 Hibernian goalkeeper Ofir Marciano hopes every bit of inside knowledge can help his country when Israel take on Scotland at Hampden.

Marciano is set to face Scotland for the first time on Friday night when his international side take on Steve Clarke’s men in the Nations League.

The 30-year-old has regained his place since the teams met in the inaugural Nations League tournament and played in all 10 of his country’s games in 2019.

“I hope they will count on my intelligence,” he joked. “Listen, today in world football you basically know everything. You can see the games online.

“But it’s good to have someone that plays in this league and knows the small bit of the game. Everything that I can give to help our staff to prepare for the game, I will give.

“Of course it’s always good when you know your opponents.”

Friday is a dress rehearsal for next month’s Euro 2020 play-off but Marciano is not viewing the first game as a warm-up.

“In my experience, every international game is always important and as soon as you wear the national team shirt, I cannot describe how proud you feel,” he said.

“You are always doing your best. You always stretch yourself to play, to perform, and that’s massive to play for the national team, so I don’t really care if it’s Nations League, play-off or whatever, it’s about representing my country and being as good as I can.”

Marciano’s form is somewhat ominous for Scotland. The 6ft 3in keeper has only conceded three goals in six games this season – two of them from the penalty spot.

“I’m just focusing at the moment, trying to work hard and upgrade my game,” he said.

“It’s quite boring, but you need to enjoy the boring stuff, to come in every day and work on simple stuff and that makes you eventually able to help the team in those situations.

“That’s something that I would like to improve in my game, in my career, and to become a better goalkeeper.”

Hibs head coach Jack Ross observed that Marciano had returned leaner and fitter after changing his diet and fitness regime during lockdown.

“I just wanted to be more at it, to upgrade my game,” he said. “And when I say my game, it’s not just out here on the pitch, it’s also mentally – stuff that I am trying to work on and being able to deal with harder times out there on the pitch.

“And obviously physical stuff, trying to be stronger, quicker, leaner.

“I just tried to have a good lifestyle – good food and just trying to focus on the things that I am doing during the day, if it’s football or other stuff. I’m trying to be in the moment and enjoy as much as I can from my life.”