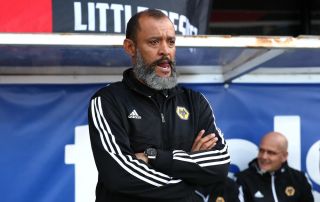 Wolves boss Nuno Espirito Santo has criticised the scheduling of matches over the Christmas period.

December’s televised games were released this week, with all top-flight clubs seeing changes to that month’s fixtures at the behest of broadcasters Sky Sports, BT Sport and newcomer Amazon.

Wolves’ festive programme was already tough with matches against Manchester City and Liverpool to finish 2019 but those games will now take place on December 27 and December 29 respectively – separated by just 44 hours and 45 minutes between kick-off times.

That represents the shortest time between fixtures for any Premier League club and Nuno described the scheduling as “impossible” for his players.

“We are the busiest team in the competition. It is absurd, it is ridiculous. Wolves are the team that has more games already and then we have to face this absurd schedule of 45 hours between games,” said Nuno, whose side began their season in July with Europa League qualifiers and will play their 18th match of the campaign when Southampton visit Molineux on Saturday.

“I keep thinking about it and I come to the same conclusion – it is absurd. The people who decide don’t have a real idea of the physical impact on players during a game. This is too much.

“I don’t understand it, it doesn’t make sense – for all the Premier League teams. I’m not the only manager speaking about this. Us as managers – someone should listen to us.”

Nuno insists the clubs were not consulted ahead of the changes and the Portuguese invited representatives of the television companies to Wolverhampton to explain their thinking behind the decision-making process.

“I hope someone from Amazon and Sky and BT comes and gives me an explanation,” he said. “I would like someone to explain to me the why. To come and say we decided Wolves will play this way because of…

“If someone is reasonable enough to come down here and visit and tell me the why and if this why is reason then I will understand it.

“Forty-five hours is absurd. No-one came and said ‘we are thinking of this, what is your opinion?’ Nobody did that. Nobody asked us that. It was this is the fixtures and they made them public. Nobody consulted us.”

Asked if broadcasters were becoming too powerful in football, Nuno added: “But broadcasters need players. People go to the stadium to see players – players they love.”

Wolves will check on the fitness of Diogo Jota (toe), Neto (foot), Romain Saiss (hamstring), Morgan Gibbs-White (back) and Leander Dendoncker (stomach) ahead of Southampton’s visit.