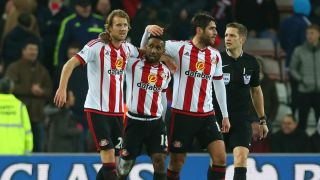 Jermain Defoe hailed a "massive" win for Sunderland as his two goals helped down fellow strugglers Aston Villa 3-1 at the Stadium of Light on Saturday.

Defoe scored in the 72nd minute to put the hosts 2-1 up and then added his second of the afternoon in injury time to end a run of five successive defeats for the Wearsiders and move them within four points of safety.

Earlier, Carles Gil's spectacular volley had cancelled out Patrick van Aanholt's deflected opener but Villa were unable to build on the Spaniard's effort and remain 11 points from 17th-placed Swansea.

Defoe told Sky Sports News: "It was the biggest game of the season. The manager said be aggressive but control the pressure.

"We knew it would be difficult with Villa also scrapping for their lives. [The win was] massive."

Defoe, 33, has not always been a first choice under Sam Allardyce this season but was pleased to have made an impact in such a big game.

"I just try to prepare myself right, there have been a lot of games in a short space of time. I always believed that if I got chances I would score," he added.

Defoe could have had a hat-trick but was incorrectly adjudged to have been offside before slotting past Brad Guzan in the closing seconds.