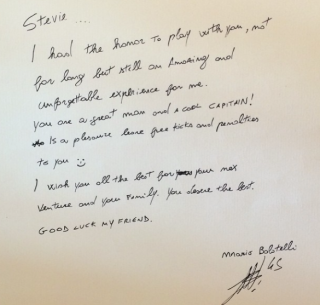 Mario Balotelli has described playing alongside Steven Gerrard as an "honour" as the departing Liverpool captain prepares to step out at Anfield for the last time.

Gerrard will make his final home appearance for his boyhood team against Crystal Palace on Saturday, with a carnival atmosphere expected as the Liverpool faithful pay tribute to arguably the club's finest ever player before he joins LA Galaxy.

And striker Balotelli, who has endured a difficult first season on Merseyside, took to Instagram ahead of the game to hail the former England skipper as "a great man".

In his handwritten note, Balotelli wrote: "Stevie...I had the honor (sic) to play with you, not for long but [it was] still an amazing and unforgettable experience for me.

"You are a great man and a cool CAPITAIN (sic)! [It] Is a pleasure [to] leave free-kicks and penalties to you.

"I wish you all the best for your next venture and your family. You deserve the best. GOOD LUCK MY FRIEND."