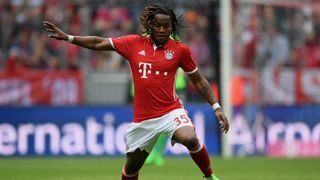 Renato Sanches conceded to being underwhelmed by his debut season at Bayern Munich, but is optimistic over his future at the club.

The 19-year-old's big-money pre-season switch to the Allianz Arena from Benfica came amid much fanfare for a player who shone in Portugal's triumphant Euro 2016 campaign, but Sanches has struggled to make an impact in the Bundesliga.

Carlo Ancelotti has afforded him just six league starts and reports have linked Sanches with a possible loan move for next season.

Speaking to the Chilean press, Sanches could not hide his disappointment, but retained hope of brighter times ahead.

He said: "It was not very good, but the next season is sure to be better. I was expecting more, of course, but I'm confident that the future will be better.

"I had a few minutes this season and I have to play to be more and more prepared."

Asked what had gone wrong for him in Germany, he added: "I do not want to talk about that, I feel good at Bayern. The goal is to play more and be more influential in the team."