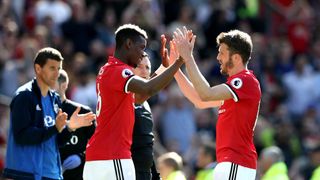 Paul Pogba's future at Manchester United is not in doubt, according to Michael Carrick.

Pogba was benched by Jose Mourinho for both legs of United's Champions League last-16 exit against Sevilla, with rumours of a rift between the pair growing.

The France international has denied having a problem in his relationship with Mourinho, who has stated Pogba will be with United for the start of the 2018-19 season.

But a fresh round of speculation was ignited by Pogba's suggestion he could move to Paris Saint-Germain in the future, leading newly appointed United coach Carrick to laugh off the links.

"It's a bit of a silly question really," Carrick said to Sky Sports.

"Of course he's got a future, he's a big player for us, he's a great age, he's got his peak years ahead of him.

"It's not even something I'd give a second thought to, to be honest."