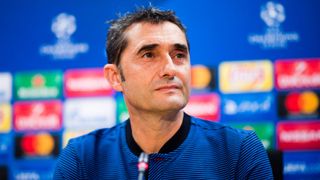 Ernesto Valverde accepts it will not be enough to challenge for just one trophy in his first season at Barcelona.

The Catalans endured a rocky start to the 53-year-old's reign at Camp Nou as they lost 5-1 over two legs to Real Madrid in the Supercopa de Espana, but they have since won seven out of seven matches in all competitions.

Valverde's predecessor, Luis Enrique, won the treble in his first season in charge – as did Pep Guardiola in 2008-09 – meaning the pressure is on Valverde to deliver.

The former Athletic Bilbao boss is not looking beyond Wednesday's Champions League trip to Sporting CP but is well aware of what is expected between now and next May.

"To be honest, I'll be happy just winning tomorrow. I don't look any further than that," he told a news conference on Tuesday.

"We don't seem to just talk about winning one trophy any more, it's now trebles and sextets. Let's just win the game tomorrow.

"If you win, everything's rosy. If you don't, it's the opposite. We know how it works."

He continued: "Sporting are a very strong team. They had a great season last year and have started well this year.

"We'll have to be really careful with their wide players, who are very quick. They like to dominate the ball so we need to take the initiative. We also need to be careful of them on the counter-attack."

Valverde is not worried about Sporting replicating the tactic, however.

"Every team is free to adopt whatever tactics they like. It's up to them and it's up to us to adapt to whatever they do," he said.

"I'll ask Messi to do what he can. We used the same tactic at Athletic in the final and we lost, so it doesn't always work."