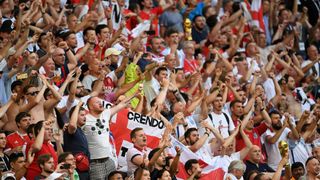 Justin Timberlake hopped aboard the "It's coming home" bandwagon by throwing his support behind England's World Cup bid on Monday.

The American pop star is currently on tour in the UK and showed his love for the Three Lions, who will play their first World Cup semi-final in 28 years against Croatia on Wednesday, during a gig at the O2 arena.

While stopping short of the singing the 1996 anthem, Timberlake thrilled the packed arena by showing his excitement for England's chances in Russia.

"It's. Coming. Home," the 37-year-old yelled. "Somebody told me the first time I came here that I became an honorary Brit, so… It's coming home.

Timberlake may have trouble following the matches live, though, with another gig in London during the semi-final and a performance in Amsterdam on Sunday, where the final takes place in Moscow.