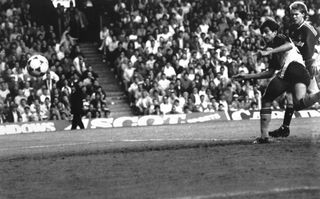 When David Pleat joined Brian Moore in the Anfield commentary box for Liverpool’s title showdown against Arsenal on May 26 1989, little did he know what drama they and millions of TV viewers were about to witness.

Just over a month after the Hillsborough disaster and less than a week since the Reds beat Everton to win a thrilling FA Cup final 3-2 at Wembley, Kenny Dalglish’s men were expected to secure the First Division championship under the Friday night floodlights in front of their own fans.

Arsenal had been clear at the top of the table as they chased down a first title in 18 years, only to be pegged back as Liverpool went unbeaten from the turn of the year to seemingly set themselves up for what would be an emotional double triumph.

George Graham’s side had lost at Highbury against Derby and were then held to 2-2 draw by Wimbledon.

Liverpool capitalised with a 5-1 thrashing of West Ham to move three points clear heading into the re-arranged fixture on Merseyside, which had been postponed following Hillsborough.

Arsenal needed to win by a margin of two clear goals – and on a ground where they had not tasted victory in 15 visits – to take the title back to north London.

During a pre-match interview, which was breaking new ground at the time for broadcasters, Graham maintained his players were relaxed, with everyone outside of Highbury expecting a comfortable Liverpool victory.

With David O’Leary deployed as a sweeper in a back five which proved a key tactical switch, Arsenal broke the deadlock in the 52nd minute.

Alan Smith glanced in Nigel Winterburn’s free-kick – the goal allowed to stand by referee David Hutchinson despite protests from the Liverpool players.

The Anfield scoreboard rolled on past 90 minutes, with tensions reaching ‘Fever Pitch’, as author Nick Hornby would recall, and Liverpool midfielder Steve McMahon was pictured signalling to the rest of his team “just one more minute”.

That, though, was time enough for what Moore would label “the most dramatic finish, maybe in the history of the Football League”.

Moore died in September 2001, aged 69, but his delivery as Michael Thomas latched onto a Smith’s hooked pass and went “charging through the midfield… it’s up for grabs now!” will continue to be replayed by generations to come.

Former Luton and Tottenham boss Pleat had helped set up the golden TV moment just when it seemed the title was set to stay in Anfield.

“I said something like: ‘it would be poetic justice if the score stays the same, at 1-0, that Liverpool would be champions and yet have been beaten here by Arsenal’,” Pleat recalled.

“Then, well, that final goal was quite incredible really. There are always great words on famous moments – Brian’s were ‘it’s up for grabs now’.”

Pleat told Press Association Sport: “Liverpool anticipated that being the home side, they could win it.

“The sympathy was with Liverpool, for what had happened, from the neutrals, all the world and his wife were hoping they would win the league. But it didn’t happen.

“It was all so dramatic, on a Friday night, under floodlights and with such a massive audience on terrestrial television. It was just a hell of a tense game.

“Afterwards, I remember seeking out George (Graham) near the dressing room. He was very, very calm – which was quite amazing really considering they had just won the title.”

In a world before the experience of the armchair fan was transformed by the evolution of the Premier League, events at Anfield that balmy May night 30 years ago gave a glimpse into the vast potential of live broadcasting.

For Graham, the dramatic outcome was a fitting reward to all those who had helped Arsenal achieve what just a few hours earlier had looked an impossible dream.

“It was desire, as well as technical ability,” the former Gunners boss recalled in the 2017 documentary simply titled ’89’.

“Isn’t it lovely to have moments in your life where you think ‘oh nothing can beat that’?”

Pleat would later work alongside Graham, appointed Spurs boss in October 1998, in his role as director of football at White Hart Lane.

The 74-year-old feels events of Anfield ’89 were a set of circumstances – with the championship itself on the line – which may well never transpire again.

“If you look at this season, with Manchester City and Liverpool both playing on the final day, but in different grounds, it was just not quite the same – but imagine if they had been playing each other?,” Pleat said.

“I had it in 1983 with Luton against Manchester City, and whoever won it stayed up.

“This, though, was the two teams in one final game playing winner-takes-all for the championship.

“It was just incredible, the last minute is always the most overpowering moment, because then you know it is too late for the opposition.

“It is staggering that it happened, and I don’t think it will again.”