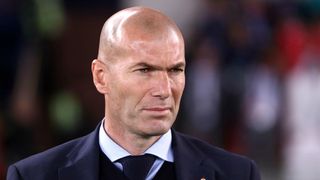 Zinedine Zidane is unsure of what his future holds at Real Madrid, acknowledging that "you never know" what can happen at the Santiago Bernabeu.

The Madrid club have a reputation for discarding coaches without much thought, with Jose Mourinho and Carlo Ancelotti among those to be shown the door in the last five years despite enjoying relative success.

And as it stands, Madrid are some way off challenging for the league title this season, as they trail rivals Barcelona by 14 points - even if they have a game in hand - after the winter break.

Madrid remain in contention in the Champions League and the Copa del Rey, though Zidane accepts that he simply has to focus on the next six months.

When asked how long he would like to coach the club, Zidane said: "It's sad but here you never know.

"I will try to end the season in the best way because we have many possibilities to win things again and that's really motivating for me and for the team. I can't look further than the six next months I have ahead."

Madrid suffered the blow of losing Karim Benzema to injury during the winter break and the French forward could miss up to three weeks of action with the hamstring problem.

And while Zidane is open to dipping into the transfer market as a result, he is holding his cards close to his chest.

"Maybe now that I will explain it in French it will be easier to make it clear," he added.

"We can sign new players until January 31, the possibility is there and anything can happen, but what I said before and the most important thing for me is that I'm very happy with my squad, and whatever happens for better or for the worse, I'm the one who built this squad and I take responsibility for that.

"I take responsibility for my choices and for everything I did, I won't blame anyone else if things don't go well, like it happened in some games.

"We are here, we're still alive in the three tournaments left and I say it forcefully and resolutely, then in June we will see what happens, but today we are here and we are still have a good position, that's for sure."