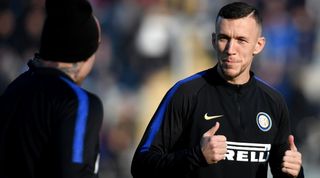 The Croatia international was left out of Luciano Spalletti’s squad for Sunday’s trip to Torino and Nerazzurri director Giuseppe Marotta admitted that he is seeking a departure, with the Gunners believed to be the frontrunners.

“We have to live with a situation that many clubs have in this period, which is players who express their desire for a transfer,” he told Sky Sport Italia.

“We listened to the player, he has this desire. We want to make him happy, but also must consider what is best for us. So far, no suitable offers have arrived, so we will wait.

“When a player is fair and tells us his mental state and what he wants, we will always listen. After that, it’s an issue of looking after the club’s financial interests.”

Inter were beaten 1-0 by Torino, and after the match manager Spalletti backed up Marotta’s comments by insisting that Perisic will continue to be overlooked if he doesn’t want to be there.

“It’s quite simple,” said the coach. “Players can say what they want, but they are employees, they have signed contracts and in order to leave, they need someone willing to pay for them.

“You can’t leave for free and with your salary paid by someone else. If, as Marotta said, he doesn’t want to play, then clearly he’ll be left out. That’s not a problem for me.

“Someone who cannot contribute to the team has to stay out.”