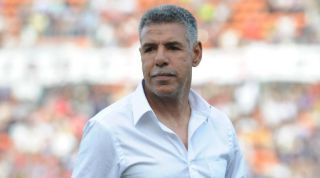 Tokushima had fallen to nine consecutive league defeats after promotion last season, but they halted that run with their first ever win in the top flight.

Yuya Hashiuchi was Tokushima's hero as he found the net in the 73rd minute to seal all three points and halve the gap at the foot of the table.

Fellow-strugglers Vegalta Sendai and Omiya Ardija also picked up points, but had to settle for draws.

Sendai picked up a much needed point courtesy of a goalless draw against Kawasaki Frontale, while a stoppage-time goal from Kenyu Sugimoto earned Cerezo Osaka a 1-1 draw with Omiya.

Early pace-setters Kashima Antlers maintained their one-point lead at the top of the table with a 2-1 victory over Shimizu S-Pulse.

Defending champions Sanfrecce Hiroshima got back to winning ways with a 2-1 victory over 10-man Sagan Tosu.

After falling behind to Kota Mizunuma's opening goal in the 13th minute, Hiroshima were level four minutes later and they secured victory with eight minutes remaining when Naoki Ishihara beat Akihiro Hayashi.

Defender Michihiro Yasuda compounded a disappointing day for Yoon Jung-Hwan's side when he was dismissed for a second yellow card in the 87th minute.

The big winners in the top half were Urawa Reds, as they climbed into fourth place after a 1-0 win over Yokohama F Marinos, while Vissel Kobe lost ground on the leaders after their 1-1 draw with Albirex Niigata.

Meanwhile, Kisho Yano's 48th minute strike was enough to earn Nagoya Grampus a 1-0 win over Tokyo and Kashiwa Reysol came from a goal behind to beat Gamba Osaka 2-1, with Junya Tanaka helping himself to a brace.