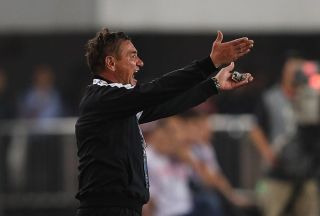 Mihailo Petrovic's men led the way by just a point heading into the encounter but now have a clear three-point advantage over Sagan Tosu as goals from Tsukasa Umesaki, Shinzo Koroki, Ryota Moriwaki and Tomoya Ugajin secured the points.

Meanwhile, Sagan Tosu were left to settle for a point, midfielder Ryota Hayasaka sparing their blushes by netting an injury-time equaliser to earn a 2-2 home draw with Shimizu S-Pulse.

Kashima Antlers and Kawasaki Frontale remain a point further back in the race for the title after they each failed to take advantage of Sagan's slip up.

An 87th-minute strike from Yoshinori Muto denied Kashima all three points, the striker celebrating his recent call-up to the Japan national squad by sealing a 2-2 draw for capital club Tokyo.

Yahiro Kazama's Kawasaki side were also left frustrated at Nagoya Grampus, who claimed a 1-1 draw to boost their survival hopes.

Nagoya, who are four points clear of the relegation zone, were the only team in the bottom six to avoid defeat in the battle to avoid the drop.

Vegalta Sendai – one point ahead of Nagoya in 13th - succumbed to an injury-time effort from defender Takumi Shimohira, whose goal helped Yokohama F Marinos to a 2-1 away victory a day after the club were hit with a five million yen fine for the racist behaviour of a fan during last Saturday's 2-0 success against Kawasaki.

Yusuke Minagawa and Ryota Morioka both marked their inclusions in the Japan squad with goals, Minagawa scoring from the spot in defending champions Sanfrecce Hiroshima's 1-0 win at bottom club Tokushima Vortis, while the latter found the net two minutes into stoppage to hand Vissel Kobe a 2-1 triumph at third bottom Cerezo Osaka.

Elsewhere, Kashiwa Reysol cruised to a 3-0 win against Ventforet Kofu, and midfielder Shu Karata netted a brace for Gamba Osaka in a 5-0 hammering of Albirex Niigata.