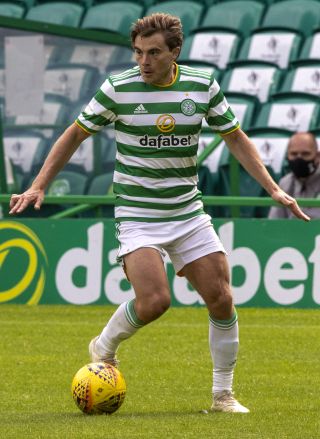 Celtic winger James Forrest has welcomed the news that fans are set to return to matches next month.

The game has been played behind closed doors this season due to coronavirus restrictions.

However, supporters were given some positive news when First Minister Nicola Sturgeon announced that, from September 14, “sports stadia will be able to reopen, though only for limited numbers of spectators and with strict physical distancing in place.”

Celtic began their quest for Champions League football without the help of their fans on Tuesday night with a 6-0 qualifying win over Icelandic outfit KR Reykjavik.

Forrest looks forward to seeing supporters back in the stands, even if the return is gradual.

He said: “When we were in France playing a couple of pre-season games, a couple of thousand fans made a difference, so I think that that slight atmosphere, home and away, will be beneficial for the players.

“On Tuesday night, you could hear all of the players on the pitch and the coaches from the dugouts.

“We just want to keep winning games and putting in good performances now, and hopefully the fans will be looking forward to getting back in.

“If it’s only a small number at the start, then that’s what it’ll be and hopefully we can then keep getting more and more people back in.”

Celtic’s hammering of KR Reykjavik earned a home game in the second qualifier against Hungarian champions Ferencvaros next week, in another tie that will be settled on the night.

The Scotland attacker, speaking ahead of the trip to Dundee United on Saturday, said: “We just need to adapt to the one-off games.

“In cup ties in Scotland as well, anything can happen and we know that we need to be at our best and hit the ground running straight from the start.

“We’re at home, which gives us an advantage, and we need to make sure that we turn up and put in another good performance.

“It was strange playing a European tie with no fans in the stadium.

“In previous years, even at this stage of qualifiers, the fans are always there, it’s a sell-out and the crowd gets right behind you.

“It was different but the boys did really well. We created chances for 90 minutes, we scored goals and it was good to be back. It was a good test.”

The game against newly promoted United will be Celtic’s third league match of the season, following a 5-1 opening-day win over Hamilton and a 1-1- draw against Kilmarnock at Rugby Park.

Forrest said: “After Tuesday night, the games are coming thick and fast and we just need to make sure that everyone is ready, and we’ve got a big squad to handle it.

“We’ve not played at Tannadice for a few years, but they have started this season strong and it’s a game that we’re looking forward to.”