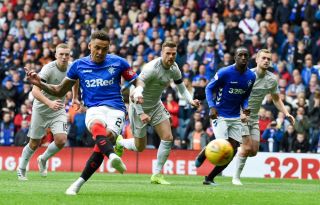 A James Tavernier penalty double helped Rangers finally get the better of Aberdeen in Glasgow as they recorded a 2-0 victory at Ibrox.

The Dons had dumped Steven Gerrard’s team out of both cup competitions in the city, while also hushing the Gers faithful on their last Ladbrokes Premiership trip south.

But Tavernier ensured their was no clean sweep for Derek McInnes’ men as he swept home twice from the spot.

Defeat means Aberdeen – who finished the game with 10 men men after Andrew Considine was shown a second yellow card in conceding the second penalty – can no longer catch Gerrard’s team for second place.

And the Light Blues also avoided handing Celtic the title on the plate, with the champions-elect nine clear with nine points still available.

Before kick-off there was a minute’s applause in memory of Celtic great and former Dons boss Billy McNeill following his death earlier this week and the home supports’ tribute was every bit as gracious as the visitors’.

🏆 Ladbrokes Premiership table after a 2-0 win for @RangersFC over @AberdeenFC at Ibrox pic.twitter.com/to3Ryxu5Ld— SPFL (@spfl) April 28, 2019

The Dons nearly got the early breakthrough 13 minutes in when James Wilson dumped a long free-kick into the back-post area – but Cosgrove could only nod wide.

It was Gers’ turn to go long soon after as Connor Goldson shelled the ball in from the back, leading to a clumsy collision between Defoe and Aberdeen goalkeeper Joe Lewis.

The Pittodrie number one took a moment getting back to his feet but McInnes would soon have reason to be relieved that he was able to continue.

Gers turned up the heat as the game reached the midway point of the half.

Ryan Kent fired wide before Lewis had to make a stunning save to keep out Defoe after Scott Arfield had sent the Englishman through on goal as he flicked a Steven Davis pass round the corner.

Gers continued to push as the game ticked towards the break. Kent delivered a ball from wide on the right but Goldson headed over while Lewis stood firm to keep out further efforts from Tavernier and Davis.

But they only had to wait three minutes after the change of ends for the breakthrough.

Davis forced an early corner and as the ball dropped at the back post, Lewis Ferguson got himself in a tangle with Defoe before tripping over Nikola Katic as he stood on the Croatian’s foot.

Referee Don Robertson showed no doubt as he pointed straight to the spot and Rangers skipper Tavernier was just as assured as he sent Lewis the wrong way with his penalty.

Defoe blew a great chance from point-blank range to double the lead after 58 minutes as Tavernier’s cross ricocheted off Lewis’ chest straight to the poacher – but he scooped over.

Tavernier had the ball in the net again after 64 minutes as he chipped over Lewis, but what would have been a stunning team goal was chalked out after the right-back had wandered offside.

But the captain did get his second as Robertson awarded Gers their second spot-kick.

Katic was again involved as Davis sent in another corner, this time going down rather softly after catching Considine’s flailing arm to the face.

The decision stunned the Dons defender and his frustration was compounded when Robertson produced a second yellow to go with the one he received just before the break as he was sent off.

Tavernier showed no mercy as he sent the ball passed Lewis’ despairing reach to confirm the points.

But Gerrard was in sentimental mood and afforded former club captain Lee Wallace a standing ovation from the home support late on ahead of his expected summer departure.