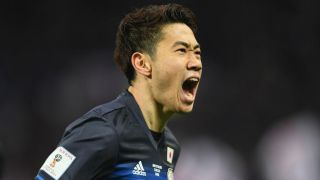 Shinji Kagawa scored a dramatic late leveller as Haiti's fine comeback proved in vain in a 3-3 draw against Japan on Tuesday.

The hosts were cruising at the Nissan Stadium in Yokohama when Shu Kuratu made it two goals in five days for his country before Kenyu Sugimoto's maiden international goal had Japan 2-0 up inside 17 minutes.

But Kevin Lafrance started the comeback shortly before the hour, and Duckens Nazon – on loan at Coventry City from Wolves – scored twice in the second half to put Jean-Claude Josaphat's side in front.

Japan went in front after just seven minutes when Kuratu's looping header from Yuto Nagatomo's cross flew over Johny Placide and into the top-right corner.

Nagatomo was involved again for the second when the full-back saw his effort at the end of a flowing move saved by Placide, only for Sugimoto to hammer in the rebound.

Haiti had a goal back before in the 28th minute, though, Lafrance coolly slotting under Masaaki Higashiguchi from Wilde-Donald Guerrier's throughball.

The visitors were then level eight minutes after the restart when Nazon finished from Carlens Arcus' assist.

It looked as though the turnaround was complete 12 minutes from time, Zachary Herivaux this time providing for Nazon to turn home.

Japan had the last say, though, as Kagawa thumped an effort high into the goal to level things up again with the clock winding down.