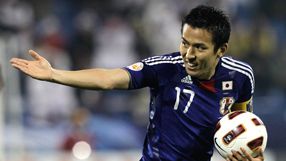 "It was your support that gave us strength on the pitch. Now it is our turn to support you together with the rest of the world," Japan captain and Wolfsburg midfielder Makoto Hasebe said before the match.

The Japan Football Association had raised almost 15 million yen ($183,500) over three days for the victims of the quake and 40,000 tickets for the match at Osaka's Nagai Stadium sold out in less than an hour, Kyodo news agency said.

"I will play for Miyagi," said national team defender Yasuyuki Konno, a native of Miyagi prefecture, one of the badly hit areas on the northeast coast.

More than 27,000 people are dead or missing from the 9.0 magnitude quake and giant tsunami waves it triggered.

The J-League All-Star team featured a number of former national team players including FC Yokohama forward Kazuyoshi Miura, at 44 the oldest player in the domestic league.