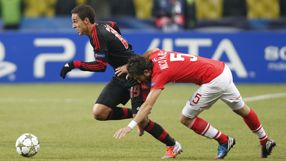 The winner came two minutes before the break when Jardel, under pressure from Spartak striker Ari, redirected the ball into his own net from a Yevgeny Makeyev cross.

The Russians had caught the visitors cold on a chilly Moscow night after just two minutes when Rafael Carioca slotted the ball into the far corner following a quick counter-attack.

Lima equalised 30 minutes later with a strong header at the near post past Spartak's third-choice goalkeeper Artem Rebrov, scoring Benfica's first goal in the group stage.

Spartak, forced to rely on Rebrov who was making his European debut after injuries had ruled out their two regular keepers, Andriy Dykan and Sergei Pesyakov, went ahead again thanks to Jardel's unfortunate intervention.

The match, however, was marred by trouble after the final whistle, involving players from both sides, before English referee Mark Clattenburg was able to restore some order.

"It was a must-win game for us, we just couldn't afford to lose again," Spartak captain Dmitry Kombarov told reporters.

"Playing in front of our fans we also had to pay them back for the two previous defeats."

"I'm very happy, not just because we won tonight but how we played for most of the match," said the Spaniard.

Spartak had also led 2-1 against Barcelona and Celtic before losing their opening group games by the same 3-2 score-line, but they were able to hold on to their advantage this time round.

Ari could have made it 3-1 shortly after the restart with a clever backheel from close range following a Jano Ananidze pass.

At the other end, Eduardo Salvio missed a great chance for Benfica with the goal at his mercy 20 minutes from time after a bad defensive error from Makeyev and Lima blasted over the bar from a good position a few minutes later.

Spartak, missing several key players through injury, illness and suspension in addition to Dykan and Pesyakov, then withstood a furious Benfica rally to put their first points on the board.

Benfica coach Jorge Jesus blamed Moscow's artificial turf for the first goal, saying his team must improve in order to have a chance to reach the knockout round.

"Our next two matches are in Lisbon and we need to win them both," he said. "Here, we had a lot of bad passes at the start because we're not used to playing on a synthetic pitch."