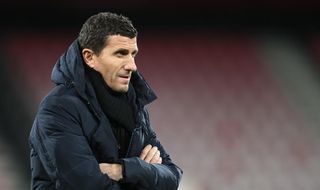 Javi Gracia insists there are “no excuses” for Watford after their 3-0 defeat to Brighton.

In Graham Potter’s first competitive game in charge of Albion, his side took a 29th-minute lead after a ball across the box from Pascal Gross was turned into his own net by Abdoulaye Doucoure.

Brighton then struck twice in the second half with substitute Florin Andone firing home with his first touch of the game, and debutant Neal Maupey expertly rounded Ben Foster before tapping home in the 77th minute to secure all three points.

“Maybe it is a good wake-up call for the rest of the season. It is the first game so we have a lot of time to improve. Today, no excuses.

“They played better than us, they deserved three points.”

Watford’s impressive record on the opening day, having avoided defeat on the first match of each of the last 12 seasons, was brought to an end by Albion who recorded their first win at Vicarage Road in five attempts, but Gracia insisted his side can improve.

“We have to improve these actions. All of us were disappointed today.

“I trust we will do better in the second game. We have time to analyse and improve.”

Potter was delighted with his first Premier League victory, but maintained there was still room for improvement.

He said: “We’re very happy with the result, with the performance I thought the players were fantastic.

“They tried their best to do what we asked them to do and we weren’t perfect of course, I wouldn’t expect that.

“But it was probably a reward for all the work the guys have done as a collective unit for the last few weeks.

“It was a positive day for us and a good start.”

On Maupey’s goal on his club debut, Potter added: “Nice for him to score. when we’re away from home at these sort of places you need the goal to kill the game off.

When asked about Brighton’s formation with three defenders, and the attacking style of football, Potter said: “We tried.

“We were brave at times, had some good opportunities to score again.

“We had to defend as well, survive the moments which you have to expect in a Premier League game.

“I’m delighted for the players.”