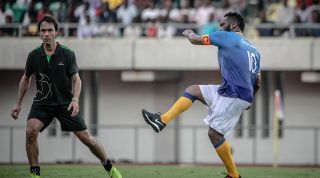 Jay-Jay Okocha has expressed his sadness at Bolton Wanderers' slide to League One, insisting the club will always remain special to him.

Okocha played 124 Premier League matches for Bolton between 2002 and 2006, helping the club into Europe for the first time in their history.

But the Nigerian has watched on with sorrow as his old club have slipped to the third tier of English football, with their relegation from the Championship confirmed on Good Friday, following a string of off-field problems.

"I had a great time at Bolton and I'm still a big fan of the club – they've got a special place in my heart," he told FourFourTwo.

"It's a shame where they are now, and with the things that are going on with the club. It is sad, but I can only hope and wish that the club get back to where they are supposed to be. It would be great to see them back in the Premier League one day."

Okocha was speaking to FFT during the UEFA Champions League Trophy Tour, presented by Heineken, as he welcomed Barcelona great Carles Puyol to Nigeria.

The two ambassadors visited the city of Uyo to play an exhibition match in front of around 20,000 fans at the impressive Godswill Akpabio International Stadium, opened just five years ago and used for Nigeria's national team fixtures.

The duo then travelled with the trophy to Lagos, Nigeria's biggest city, to greet more fans. This year's trophy tour began in South Africa and has since visited Namibia, Indonesia and China. It will end in the United States, ahead of this season's final at the Wanda Metropolitano in Madrid on June 1.

"I've been very honoured to be part of the trophy tour," Okocha said. "I'd been part of it before, but not in Nigeria, so it's been great to be involved at home."

Okocha is now 45 and the last of his 73 caps for Nigeria came 13 years ago, but his popularity remains and he says he's flattered when people describe him as the Super Eagles' greatest ever player.

"I try to stay humble," he smiles. "But it is encouraging, especially for the young ones coming behind me – they know that if you do a good job, you will be appreciated. For me, it shows that hard work does pay off."

There will be more from Okocha about his time at Bolton in an upcoming issue of FourFourTwo magazine, as well as an exclusive interview with Carles Puyol in our magazine out on June 5.

Just when you thought you’d seen it all, more #unmissable moments happened. Don’t miss out on the best highlights from our Nigerian Trophy Tour!
.@ChampionsLeague@Carles5puyol#ucltrophytourpic.twitter.com/T99FGMIcVm— Heineken (@Heineken) April 19, 2019