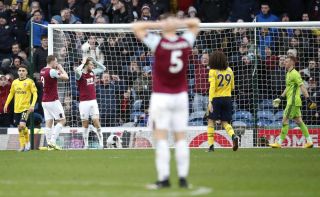 Jay Rodriguez was inches away from grabbing a late winner for Burnley as Mikel Arteta’s Arsenal revolution threatened to take a worrying turn at Turf Moor.

Rodriguez struck the underside of the bar from close range in the 77th minute before the ball bounced down on the line to deny the Clarets three richly deserved points.

Rodriguez, James Tarkowski and Jeff Hendrick had already spurned golden opportunities to put their side in front while the Gunners, still without a Premier League win since New Year’s Day, seldom threatened in the goalless draw.

Sean Dyche had named the same side that won at Old Trafford and save for some shaky finishing, was richly rewarded with a strong and vibrant display from his side.

Neither of Arteta’s deadline-day new boys, Cedric Soares or Pablo Mari, were included in the Gunners’ matchday squad due to fitness issues.

Arsenal had their best spell of the game in its opening stages, in which Alexandre Lacazette headed wide and Pierre-Emerick Aubameyang mis-kicked after being served up a chance by David Luiz.

Burnley grew into the game and came close in the 18th minute when Chris Wood nodded down for Rodriguez to fire a low drive which took a slight deflection and was tipped round the post by Gunners keeper Bernd Leno.

A fine last-gasp challenge from Tarkowski denied Lacazette moments later with the Frenchman’s dramatic fall prompting an angry reaction from the Burnley defender, leading to a brief confrontation in the box.

For all the visitors were enjoying the majority of possession, they continued to look vulnerable at the back and, given space, Ashley Westwood was not far away with a thunderous drive approaching the half-hour mark.

Despite the onrushing Nick Pope dashing out to block another chance for Lacazette, it was the hosts who came on strong in the final minutes of the first period, and Hendrick came closest with a bending drive just over Leno’s bar.

Burnley continued to threaten early in the second period, with both Tarkowski and Ben Mee flashing golden chances wide from dangerous Westwood free-kicks.

And the Clarets fashioned an even better chance just before the hour mark when Dwight McNeil whipped in a cross from the left and Hendrick somehow headed wide from point-blank range.

The Gunners withstood the surge and almost capitalised in the 75th minute when Aubameyang flashed a header inches wide on the end of a lightning counter-attack.

But the Clarets rearguard, marshalled superbly by Tarkowski and the outstanding Matthew Lowton, restricted the visitors’ clear-cut chances to a minimum.

Burnley were even closer to grabbing a deserved opener two minutes later when McNeil lofted the ball into a busy box and Rodriguez lashed a shot which hit the underside of the bar and bounced down onto the line.