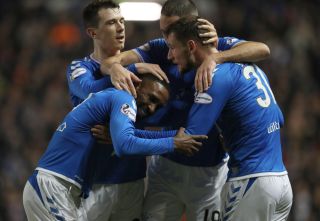 Saints boss Jim Goodwin stuck by his promise to park “two buses” across Vaclav Hladky’s goal as he looked to put the brakes on Rangers’ title charge.

It did not make for a pretty spectacle but boss Steven Gerrard was relieved to see Defoe stab home the winner 11 minutes before the interval as his side kept themselves on track.

It was at this stage of the season last year that the wheels came off Rangers’ title bid as they hit the skids at Rugby Park.

But this victory keeps the Light Blues two points behind Celtic with a game in hand, while Saints now sit just a point above the relegation zone.

Gers were missing two of their most potent weapons in the suspended Alfredo Morelos and injured skipper James Tavernier.

Goodwin’s plans, meanwhile, were disrupted inside the first five minutes when Kyle Magennis had to be taken off on a stretcher, with Ilkay Durmis taking his place.

But that made the job of breaking the Paisley outfit down little easier for Rangers.

Nikola Katic headed over from a corner while Ryan Kent was unable to squeeze a finish past Hladky after working a clever one-two with Defoe.

With the Buddies refusing to roll over, Gerrard needed one of his men to produce something special.

Borna Barisic – so crucial in last month’s Parkhead win – was the man to step up again. He almost created the opener on the half-hour mark as he danced past Ryan Flynn but found no takers for his cut-back.

But Defoe was perfectly positioned to redirect the ball home in the 34th minute when the Croatia left-back’s strike deflected off the heels of Junior Morais into his path.

A half-time display of drums and dancing dragons to mark the Chinese New Year was an injection of some much-needed entertainment after that drab first period.

Unfortunately for the 49,297 in attendance, the second-half action was not much livelier than the first as Saints refused to budge and Gers lacked the focal point in attack usually provided by Morelos.

Katic nudged just wide as he got on the end of a Steven Davis free-kick after 67 minutes, while it took a last-ditch Paul McGinn tackle to deny Defoe after Conor McCarthy put the visitors in trouble as he fired a sideways free-kick straight at Joe Aribo.

The Ibrox faithful did hold their breath when Cammy MacPherson’s deep free-kick found McCarthy unmarked in the box but there was no need to worry as the former Dundalk defender’s header dribbled wide.

Substitutes Sheyi Ojo and Scott Arfield should have made the last few minutes more comfortable for Rangers but neither could find the net.