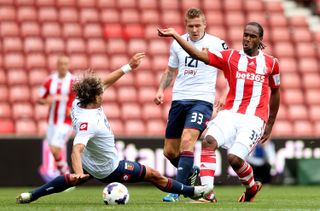 Following an Independent Regulatory Commission hearing, the Stoke City striker has been issued with the penalty subject to appeal.

A statement published on the FA's website on Wednesday read: "Jerome, who was also severely warned as to his future conduct, admitted a number of breaches of the FA's Betting Rules and requested a personal hearing which took place on Tuesday 13 August 2013."

The 27-year-old - who moved to the Britannia Stadium from Birmingham City in August 2011 - was initially charged by the governing body on August 5.

His club also released a statement following the FA's decision, in which they noted that they wish to "make clear that Jerome has not incurred a ban or suspension".

The former Cardiff City man has scored 12 goals in 66 games since signing for Stoke.