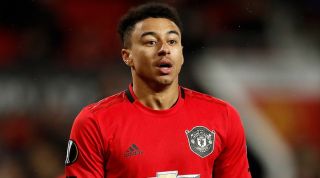 Meulensteen worked alongside Alex Ferguson at Old Trafford between 2007 and 2013.

Lingard did not make his competitive debut for United until 2014, although he recieved his first call-up to a matchday squad two years earlier.

Lingard's maiden appearance at senior level came during a loan spell at Leicester, and the attacking midfielder also represented Birmingham, Brighton and Derby during temporary spells away from Old Trafford.

The England international has been criticised for poor form this season, but Meulensteen believes that has nothing to do with a lack of ability.

"Jesse had various loan clubs and then he came back,” Meulensteen told The Michael Anthony Show.

“And I think Louis van Gaal was the manager at the time and Louis was very big on bringing young players through and Jesse got the chance to suddenly play in the first team and so did [Marcus] Rashford.

“That's the luck that you need and certain managers can see it. Jesse always had attributes in his game as Iniesta had for Barcelona.

“Jesse, in my opinion - and I think he knows it himself, he's a great kid - he's the sort of player that's so difficult for opposition teams to mark.

“I think it's more a confidence thing, you need to recognise as staff and coaches and say 'okay, when did you have the best games? When did you score the most goals? And why isn't it happening now?'

“Somewhere down that line there's a dent and you need to find that and what you can do to make sure the focus goes back.”

United return to action next Monday, when they face top-four rivals Chelsea at Stamford Bridge.