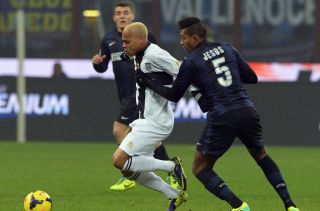 The Brazilian was forced off in the first half against Bologna and had scans on his injury the following day.

Unfortunately for Jesus, the results of those scans have effectively ended any hope he may have had of featuring at the FIFA World Cup later this year.

A statement from Inter on Sunday read: "Juan Jesus underwent diagnostic procedures this morning after being forced off the pitch in the 28th minute of last night's match against Bologna.

"The examinations revealed a complete rupture of the medial collateral ligament in the defender's right knee."

Jesus has not featured for Brazil since 2012, but has been a mainstay for Walter Mazzarri's Inter this season, making 29 appearances in all competitions.

Walter Samuel replaced Jesus against Bologna and is likely to fill in at centre-half for the remainder of the campaign as as Inter aim to secure a place in next season's UEFA Europa League.