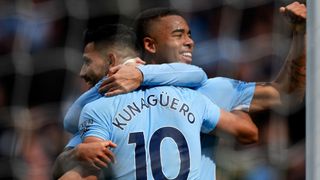 Gabriel Jesus is relishing his blossoming partnership with the "amazing" Sergio Aguero at Manchester City, claiming their off-field relationship aids their compatibility on the pitch.

The 20-year-old Brazilian joined City in January and swiftly established himself in the side, with many perceiving his form to be a threat to Aguero.

As such, Aguero began to find himself out of the team a little more, with Jesus scoring three goals in his first three Premier League appearances to give the Argentina international some serious competition.

Although a broken metatarsal in February disrupted Jesus' progress, he quickly recaptured his form upon his return and carried that over into this season.

Suggestions that Jesus was there to replace Aguero have since been put to rest, however, with the pair often playing – and impressing – in tandem, and neither seems to have been impacted negatively considering the fact they have scored 13 league goals between them this term.

"I get on with Sergio very well," Jesus told Premier League Productions. "He's an amazing guy. All of us know what type of player he is. He's a fantastic person and I'm a fan of his.

"It's very good to play with him. When you have a good relationship off the pitch, it's easier to bring it on to the pitch. That's what we have.

"We help each other and that helps Manchester City. We both defend the shirt of this club, so we pull together on the pitch, the same way we get along off the pitch.

"I support him and I hope he can beat the record as soon as possible. He deserves to become the top scorer of this club."

It has been a great year all round for Jesus and it could yet become even more impressive, because if he plays in City's next two games – against Wolves and West Brom – and avoids losing, he will have gone 12 months without suffering a competitive defeat for club and country.

"I'm very happy to have been all this time without losing a game," he said. "But it's not only me; it's thanks to the teams I have played in, such as Palmeiras, the Brazilian national team and now Manchester City.

"I'm very happy for achieving that milestone, but I must keep working hard and keep performing well in the games."