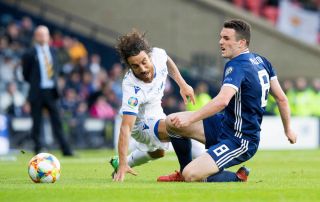 Steve Clarke’s first game in charge of the national team on Saturday night was loaded with pressure after the Scots had lost to Kazakhstan in their opening Group I fixture, before beating San Marino.

Skipper Andy Robertson gave the home side the lead in the 61st minute with a superb strike from 20 yards but with three minutes remaining Cyprus defender Ioannis Kousoulos stunned the Tartan Army in a decent crowd of 31, 277 when he headed in from a corner.

It threatened to be another dismal result for the Scots but two minutes later Burke, on for debutant Eamonn Brophy in the 73rd minute,  grabbed a dramatic winner with his first senior Scotland goal after his header had rebounded off the post.

Scotland have a Nations League play-off semi-final next year as a Euro qualification safety net but McGinn acknowledged the importance of Burke’s goal to the traditional qualifiers as he turned his attention to Belgium in Brussels on Tuesday night.

“We were moments away from our campaign ending really,” said the Aston Villa midfielder.

“We had to show character. The manager is clear on how important 14 players are on a match day and Oli’s winner was crucial for us.

“I think everyone knew how important the game was and it started getting a little bit tense towards the end but we showed great character.

“So it has kept us going. We are definitely in it now.

"Great character and great resilience from the players to bounce back and get the winner in such a short space of time."— Scotland National Team (@ScotlandNT) June 8, 2019

“We start with Belgium on Tuesday night and we will do whatever we can to get something from it.”

The former St Mirren and Hibernian player remembers all too well Scotland’s 4-0 defeat to the team ranked number one in the world in a Hampden friendly last September.

McGinn picked out Eden Hazard, who has agreed a move from Chelsea to Real Madrid for a fee which reportedly could reach £130million, as the best of a great squad.

He said: “They have dangers all over the park. Eden Hazard has just signed for Real Madrid, that emphasizes how strong a squad they are.

“He is definitely in the top three or four players in the world. I played against him at Hampden once before and he was top drawer.

“He fully deserved his move to Real Madrid. I think he will be a big miss to the Premier League but at £130million, I hope he saves his legs for La Liga campaign.

“I am sure Belgium are still number one in the world so we need to respect them but at the same time try to impact on them. They are top players but you want to test yourself against the best.

“If we want to get to the finals of a major tournament we are going to have to take points off a team like Belgium.”