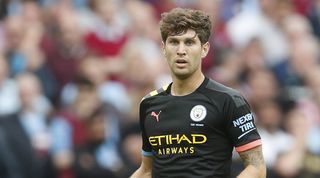 The Manchester City centre-back has been linked with a move away from the Etihad Stadium, having only made 10 Premier League appearances this season.

Despite a lack of fit central defenders, Pep Guardiola has been reluctant to partner Stones with Nicolas Otamendi at the heart of the City backline.

Mikel Arteta is keen to strengthen his squad having quit his role as City's assistant manager to take charge of Arsenal.

And Parlour believes Stones would provide some much-needed competition for places at the Emirates Stadium.

“I’d be very, very happy if they brought someone like John Stones to the club," he told talkSPORT.

“He would definitely play. With Calum Chambers out and Rob Holding in the background, if one of [David] Luiz or Sokratis get injured Arsenal have not got a lot of back-up at centre-half.

“Would Luiz and Stones work together? Well, they have got Sokratis… Stones could play alongside him. He’s the better defender.

“Luiz has done alright in recent weeks. He has done better. He does make a mistake, and we’ve seen that this season, but I think he’s done well.

"I think, if you are really struggling in midfield, you could play Luiz as a holding midfielder.

“He can play there because he’s got that range of passing and he is very good on the ball, he is technically very good.

“So they could play Stones and Sokratis at the back with Luiz in front of them, that could work.”

Arteta's side will be looking to close that gap when they host Sheffield United on Saturday, before next week's London derby against Frank Lampard's side.