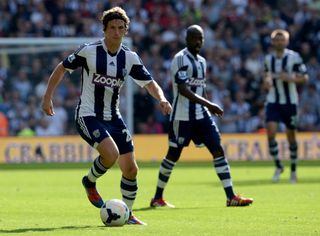 Hodgson lured the right-back to The Hawthorns from Preston North End in June 2011, a transfer that followed the Lancashire club's relegation to the third tier of English football at the end of the previous campaign.

From League One to the top flight in an instant, Jones has not looked back and has flourished at West Brom to become a mainstay in the team, playing every minute in the Premier League this season under Steve Clarke, who took charge when Hodgson became England boss in 2012.

Jones has expressed his gratitude to Hodgson for spotting his potential to become an established Premier League player.

"Roy was massive for me," Jones told the Birmingham Mail.

"To Roy and Dan Ashworth - the main people involved in that move - I have to say thank you.

"I'd just been playing at Preston, a team that had been relegated from the Championship to League One.

"They saw enough to give me the chance of playing Premier League football.

"It was crazy. It therefore turned out to be a good season for me, even though we got relegated."

He added: "I know when I signed I can just imagine how it must have looked to fans: What are the Albion thinking, signing this lad who's just been relegated to League One with Preston when we’ve just finished 12th and want to improve?

"I'm grateful and thankful I got that chance.

"And I knew when I signed that the hard work would start again to get those chances to get into the team and stay there."