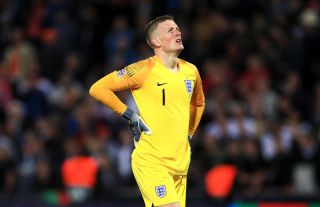 Defensive errors were the main reason behind a 3-1 extra-time defeat to Holland in the Nations League on Thursday night as Gareth Southgate’s side followed up last summer’s World Cup last-four loss to Croatia.

They led in both ties before eventually being dumped out just one game away from the final of both competitions, meaning the wait to win their first major trophy since 1966 went on.

Pickford was one of very few England players to look anywhere near their best on a disappointing night in Guimaraes and has backed the Three Lions to learn from another setback.

“The best thing about it is that sometimes these results make us better in the future,” the Everton goalkeeper told beIN Sports.

“We have got a big Euro 2020 coming up next year and hopefully this will spur us on a bit more to try and get through to a final because we have had two semi-final defeats but we learn and we keep going.”

Gutted with last night's result but this doesn't take away from what we're trying to achieve 🏴󠁧󠁢󠁥󠁮󠁧󠁿 @Englandpic.twitter.com/l55hjOD9KQ— Marcus Rashford (@MarcusRashford) June 7, 2019

Marcus Rashford had opened the scoring for England with a penalty before Matthijs De Ligt made up for conceding the spot-kick by heading Holland level.

Jesse Lingard came off the bench and thought he had won it late on, only to see his effort chalked off by the Video Assistant Referee for the tightest of offside calls.

The game went into extra-time where John Stones was caught in possession by Memphis Depay, whose initial shot was brilliantly saved by Pickford only to eventually be turned home by Kyle Walker for an unfortunate own goal.

With England chasing the game, a stray back-pass from Ross Barkley went straight to Depay, who squared for Quincy Promes to tap in a third.

“John has just tried to play it back and got caught – that is football,” explained Pickford.

“You have got to take risks, it is the way we try and play football. I made a good save low to my right and saw a player running towards the ball.

“Kyle saw exactly the same and it was a very lucky goal, it was going wide but hits Kyle as he slides down but we still had 25 minutes of play and we kept going and we never say never.

“I think we played very good football up until then and we know how good a side the Dutch are and knew they were going to press us all the way – we were unfortunate.

“But the set-piece that went in, disappointed with that but we kept going and kept digging in and played some very good football with Jesse’s goal just offside, then mistakes cost us the game but the good thing is we can learn from that, we can move forward as a team and only get better.”