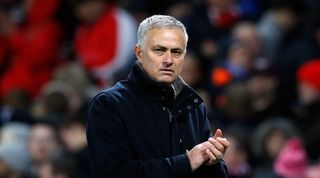 Jose Mourinho wants to return to Real Madrid for a second spell as the club’s manager.

The Portuguese won a La Liga title and a Copa del Rey during his three seasons in charge at the Santiago Bernabeu between 2010 and 2013.

He departed the Spanish capital under a cloud after falling out with Iker Casillas and Sergio Ramos.

However, Goal report that Mourinho is now keen to take up the position again as he plots his return to management.

The 56-year-old has been out of work since his dismissal by Manchester United last December.

The former Chelsea and Inter head coach has received numerous job offers since then, but none have completely satisfied him.

Between May and September, Mourinho turned down approaches from Milan, Wolfsburg, Schalke, Monaco and Lille.

The two-time Champions League winner believes he is still capable of succeeding at the highest level and is therefore holding out for one of Europe’s biggest clubs.

PSG, Juventus and Bayern Munich are three teams who interest Mourinho, who would also have been open to a move to Tottenham had Mauricio Pochettino departed earlier this year.

Mourinho did not include Madrid on his list of targets as he believed club president Florentino Perez would appoint Pochettino in place of Santiago Solari last March.

Instead, Zinedine Zidane returned to the Bernabeu having previously left the club at the end of the 2017/18 campaign.

Madrid are currently top of La Liga but that has not stopped Zidane coming under pressure in the early weeks of the season.

A 3-0 defeat by PSG in the Champions League has left the Frenchman vulnerable, and Mourinho is keeping close tabs on the situation as he eyes a return to los Blancos.