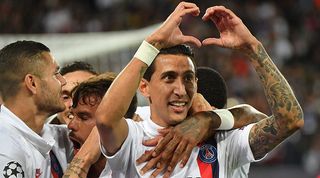 Considering their abundance of riches and heavy investment in star players from around the world, Paris Saint-Germain have endured some torrid seasons in the Champions League.

The club’s Qatari owners have spent over €1bn trying to turn the Ligue 1 side into champions of Europe’s most prestigious club competition, but PSG have never gone past the quarter-finals since then. Worse still, they've been eliminated at the first knockout stage in each of the last three seasons – including that monumental collapse against Barcelona in 2016/17 – and are at serious risk of being branded as the most underwhelming side of the Champions League era.

PSG have had no trouble hoovering up domestic titles, but it's not enough. Carlo Ancelotti, Unai Emery and Laurent Blanc have all found out the hard way.

Yet Wednesday’s dominant 3-0 win over Real Madrid in their 2019/20 Champions League opener offers reason to believe that maybe this PSG side, with Thomas Tuchel settled at the helm, are finally ready to take the next step in their quest for glory.

There was a lot to like as they dismantled Zinedine Zidane's side at the Parc des Princes, particularly in the way that their full-backs dominated. One of the key protagonists was left-back Juan Bernat, who provided the assists for PSG’s first and third goals on a successful evening for the Spaniard.

In his first direct contribution, the Spaniard demonstrated a superb change of pace before laying on a perfectly weighted ball for former Madrid player Angel Di Maria to poke home. His assist for the third goal was equally impressive: an 80-yard sprint to catch up with fellow full-back Thomas Meunier, followed by a one-two with the Belgian who coolly converted.

The cherry on top of a perfect performance in Paris pic.twitter.com/OvFrJQGYgx— Football on BT Sport (@btsportfootball) September 18, 2019

That PSG’s two full-backs were the most advanced players on the pitch was telling; Tuchel’s philosophy is attacking, but the German tactician looks to have found the perfect balance in midfield to counteract this style of play from Bernat and Meunier.

For them to be most effective, Tuchel is heavily reliant on the opposition wingers neglecting their defensive duties. Thankfully for PSG, Gareth Bale and Eden Hazard weren't especially keen on tracking back past the halfway line and into their own half.

It created the perfect 2v1 overloads out wide against Madrid full-back Dani Carvajal, as seen in the first goal when Bernat wheeled past his helpless compatriot who was surrounded by white PSG shirts in defensive transition.

Ángel Di María gives #PSG the lead against his former club. Well-worked move down the left with Icardi and Bernat, and then Di María beat Courtois at the near post.#PSGRMA#UCLpic.twitter.com/CPtzAUYqfp— Joga Bonito (@Jasoninho10) September 18, 2019

The reluctance for opposition wingers to track back means PSG’s full-backs are a threat in big matches – and could continue causing problems throughout the Champions League this year.

Even if PSG are turned over in possession, Tuchel deploys his wider central midfielders - in this case, Idrissa Gueye and Marco Verratti - in covering positions, which means that the French club are unlikely to be short in defence on the counter-attack.

Summer signing Gueye has added a new dimension to the heart of Tuchel’s team – one previously sorely lacking in Paris – and the former Everton man's all-round display was a joy to watch on Wednesday evening. The 29-year-old was relentless against an all-star Madrid midfield consisting of Toni Kroos, Casemiro and James Rodriguez, and PSG’s second goal was largely down to Gueye’s intense hounding. He burst through midfield when the play was slowing, teeing up Di Maria for his fine second of the game.

Angel Di Maria is on fire

He bags his second goal of the first half vs Real Madrid with a sweet strike!

Neymar and Mbappe loved that one pic.twitter.com/JAswjUH1lC— Football on BT Sport (@btsportfootball) September 18, 2019

Gueye’s best moments of the game came in the second period; first when he expertly pinched the ball off Casemiro to start an attack which nearly led to another Di Maria goal, before bursting down the left and using his smart link-up play as winger Pablo Sarabia almost got in on the act.

The security of having an all-action midfielder like him gives PSG a perfect balance in midfield. Gueye’s presence gives midfield partner Marquinhos some much-needed assistance in the middle, and grants Verratti extra freedom to create in the attacking third.

The obvious weapons in PSG’s arsenal are their attacking trio of Edinson Cavani, Neymar and Kylian Mbappe, yet their absence for the Madrid match demonstrates PSG's remarkable depth in the final third – here, they lined up with a far-from-shabby forward line of Sarabia, Di Maria and loan signing Mauro Icardi.

Di Maria in particular offers a different dimension to PSG’s forward play. The Argentine is often consistent in the big matches, and is now the only player in Champions League history to score a brace against both Real Madrid and Barcelona in Europe’s elite club competition.

The way in which Tuchel has used Di Maria and Sarabia as wide players this season is another interesting feature of PSG’s line-up.

Sarabia is a left-footer who terrorised La Liga defences last year for Sevilla, while the flexible Di Maria can play across midfield. Both like to drift inside during key attacking moments, which not only allows more space for the overlapping full-backs but also overloads the middle of the pitch and gives full-backs and central defenders serious dilemmas.

PSG will still probably need the likes of Neymar and Mbappe as their Champions League campaign progresses, but their encouraging performance shows that Tuchel has several options and enviable depth in his side. The key to success is likely to be how well they defend rather than attack – their common undoing over recent seasons – but France's dominant champions already look better prepared for the bigger battles ahead.

COLUMN Arseblog: What kind of team does Unai Emery want Arsenal to be?

LIST What happened to the 20 youngest Champions League scorers?