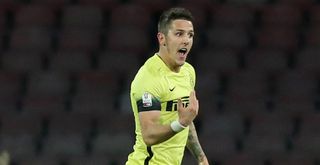 Inter forward Stevan Jovetic said his side's 2-0 Coppa Italia quarter-final win against Napoli was just what the team needed ahead of a return to Serie A action.

Inter has won just one of their last four matches in the league, slipping to third in the table, and Jovetic - who scored the opener in Tuesday's cup triumph - hopes the result is the catalyst for them to return to winning ways.

"That's just the win we needed, against a good side in a tough place to come. The whole team played well," the Montenegro international told the Inter website.

"We struggled a bit in the first half but we stepped it up a gear after the break and played our football. I was missing a goal.

"At times you don't manage to do what you set out to. I always try to give 100% but we're not machines."

"I'm delighted with my goal and the team's performance. They can cause you problems but we created chances and scored twice," Ljajic said.

"We need to keep going, we have a big game coming up against Carpi and we must begin thinking about it tomorrow. They were saying we're on bad form but I don't think that's the case, we haven't had much luck.

"We knew it'd be tough today, this is not an easy place to come for any side, but we gave 100%, we're Inter and we should always play like this."

Inter are four points off the pace in Serie A, with Napoli leading the pack.