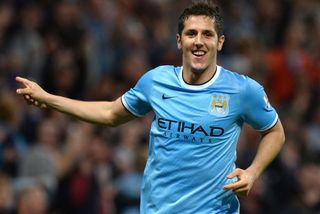 The Montenegro international completed a reported £22million move to the Etihad Stadium in July, bringing an end to a five-year association with former club Fiorentina.

Jovetic was rumoured to have been interested in a switch Serie A champions Juventus, and he admitted the two sides discussed a potential deal.

But he rejected claims he had set his sights on a move to Antonio Conte's side and is happy to have moved to England.

Speaking to Tuttosport, he said: "I never said I wanted Juventus.

"It  is true that there was a negotiation. But I chose to go abroad."

Jovetic also backed his former charges to claim a UEFA Champions League spot this season, despite an indifferent start that has seen them drop nine points in the league.

"I have many friends in Florence. They have been a bit unlucky at the start of the season, but even though it will be tough I think they can still reach the Champions League."