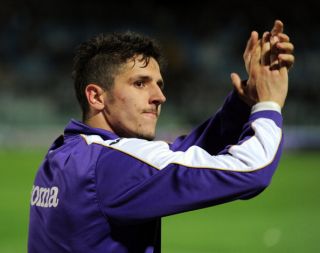 Fiorentina announced the sale of Jovetic to Manchester City on Thursday for a reported figure of £22million with the 2011/12 English Premier League champions snaring the Montenegrin forward and Spain international Alvaro Negredo on the same day.

Jovetic was keen to stress he thoroughly enjoyed his five seasons with Fiorentina and conceded the club's fans might be disappointed he has left the Serie A outfit.

But the 23-year-old said he could not ignore the opportunity to play for Manchester City alongside former Partizan Belgrade team-mate Matija Nastasic.

"City are a very important team in the Premier League.

"I want to win things and I'll see my great friend Matija Nastasic."

Jovetic scored 40 goals in 134 appearances in all competitions for Fiorentina during which time the Florence-based club never finished higher than fourth and after his five seasons in Serie A the young Montenegrin does not believe he can do anymore in the famous purple shirt.

"Now the fans are a bit cheesed off with me and that's only right but I never had a bad word to say about them, or about Fiorentina," Jovetic said.

"But please try and understand me, I'm still young and I did all I could wearing this jersey but now I need a change. Is that so wrong?"

Jovetic also hailed Fiorentina for shaping him during a crucial period of his career.

"I spent beautiful years with the purple shirt," Jovetic said.

"I arrived as a kid, I'm going away man and footballer. Thank you all.

"Florence will remain forever in my heart, but especially the Fiorentina fans."