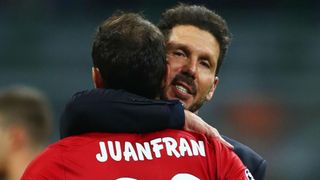 Juanfran expects Diego Simeone to remain at Atletico Madrid beyond this season and has backed the team to record a first win of the LaLiga season away to Celta Vigo on Saturday.

Simeone is under contract until June 2020, but has been linked with several top club and national team jobs after guiding Atletico to LaLiga glory in 2013-14, as well as two Champions League finals, losing to Real Madrid on each occasion.

Atleti are set to leave their historic Vicente Calderon home at the conclusion of the 2016-17 campaign, with Spain international Juanfran convinced Simeone will want to lead the club through a period of off-field transition.

The Argentine, though, may seek to reassess his future after FIFA rejected Atleti's appeal against a transfer ban, meaning the club will be unable to register and field new players for the next two transfer windows.

"I'm convinced that next year he will be our coach," Juanfran told the club's website before news of the judgement was released.

"He is excited, as we all are, with the new stadium. This year is the last in the Calderon, and all the Atleticos are going to live something special, I'm sure.

Atletico have opened the league season with frustrating draws at home to Deportivo Alaves and away to Leganes.

Juanfran acknowledged it has been a disheartening start to the campaign, citing the increased expectations that accompany the team following their recent success as a factor.

"The dressing room is better than ever," he said.

"We have had results that we would have preferred not having, but we only look forward to winning. I'm convinced that if we can win in Vigo, things will be seen differently. The team is doing well and we're getting players back from the national teams.

"I'm convinced that the group is going to play a great match and we're going to win on Saturday. The team is doing well and we are not alarmed or nervous.