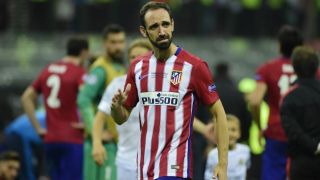 Atletico Madrid defender Juanfran has promised that his side will one day win the Champions League in a heartfelt letter to the club's fans.

Juanfran struck his penalty against the post in his side's shoot-out defeat to Real Madrid in Saturday's final at San Siro, allowing Cristiano Ronaldo to secure the win from 12 yards.

A tearful Juanfran was applauded by fans inside the stadium after the match, and the 31-year-old has vowed to repay that support by delivering the Champions League trophy after two final defeats in three years.

"Hello Atleticos," a message posted via Atleti's official website began. "I have asked the club to address all of you with this letter to tell you everything I feel.

"I will never forget your displays of affection when I came to ask for your forgiveness. Seeing my tears reflected in the faces of the thousands of Atleticos that packed that end of the stadium helped me cope with the tremendous sadness I felt in those hard times. As well as the support of my team-mates, coaches, and all the people that makes this big family.

"I also want to thank you for always believing in us and, above all, for proving that being an Atletico is something very special, different, and that our heart beats stronger than any other.

"Two years ago, I told you that we would return to a final, now, I tell you that Gabi, our captain, will lift the Champions League sooner or later, and we will celebrate it all together in Neptuno [the statue in Madrid].

"I love you very much and GO ATLETI."