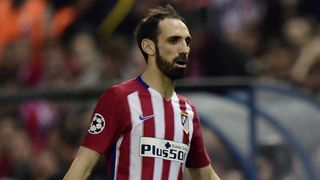 Juanfran says he is desperate for Atletico Madrid to take one last step to the Champions League final ahead of Tuesday's semi-final second leg against Bayern Munich.

Atletico take a slender 1-0 lead into the game in Munich, and Juanfran is hoping his side can see out the second leg to move into the final.

"It's the little step remaining to reach that final dreamed by all," he told the club's official website.

"I'm convinced that we will play a great match in an incredible setting against a historic team.

"I think that in the first-leg match, we played a great first half and that allowed us to hang on during the second half. We are a team that defends very well and we all compete to the fullest in every moment.

"I'm sure that if we go out strong from the start, we will take the match to where we want to and in the end, it will work as we wish."

Juanfran has already experienced some magical moments with Atletico, having been a part of the team that won the La Liga title in 2013-14 and finished runners-up in the Champions League in the same season.

Atletico remain in the hunt for both this season, level on points with Barcelona in the league - though in second place on head-to-head record.

And Juanfran said he was relishing the run-in and big matches that come with competing at the top.

"To compete against fantastic players, you have to be very concentrated," he said.

"We know that these games are decided by details, and we are a team of details, and I am convinced that things are going to go as we want during the match.

"We are going to defend well, attack well and I'm sure that things will go where we want to."