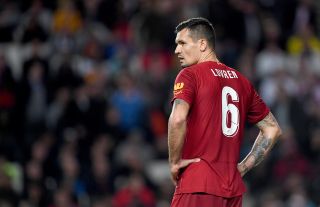 The Croatia international has ended a six-year spell at Anfield after making just 15 appearances this season, falling to fourth-choice centre-back in the pecking order behind Virgil Van Dijk, Joe Gomez and Joel Matip.

Lovren, who was troubled with niggling injuries over the last two years, was set to enter the final year of his contract but Liverpool chose not to take up an option they had for a 12-month extension to allow the centre-back to sign a three-year contract with the Russian club.

“Another Liverpool legend who leaves the club, because he was absolutely a very, very important part of this team from the first day since I was in,” Manager Jurgen Klopp told liverpoolfc.com.

“When he was fit, he was very, very, very often in the team. A great player and a great person.

“Really good, in the air a machine, and I really liked working together with him.

“It will be interesting to follow Zenit St. Petersburg now. I wish him the best of luck.”

Arguably Lovren’s greatest moment in a Liverpool shirt came when he scored a stoppage-time header to beat Borussia Dortmund 4-3 at Anfield in a Europa League quarter-final second leg tie which paved the way for them to reach the final in 2016.

His lowest point was being hauled off after just 31 minutes of the 4-1 defeat against Tottenham in October 2017.

“He played super games and scored one of the most important goals of our history in the 4-3 against Borussia Dortmund; a really wonderful moment to share,” added Klopp.

“He had so many good games. Yes, I think he will not like the Tottenham game when I took him off in the first half, but it is part of football and part of development – and he always came back.”