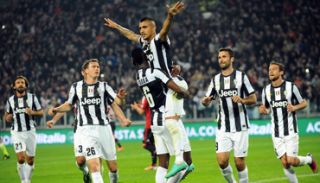 With their own stadium, recent stability and restrained transfer policy, forward-looking Juventus are the club who have best adapted to the harsh new financial realities of Serie A.

Lowly Palermo, on the other hand, have been mired in chaos, firing and hiring coaches at embarrassing speed on the whim of their eccentric president Maurizio Zamparini.

Juventus, 11 points clear of second-placed Napoli, need only a point on Sunday to retain the title and, even in the unlikely event of a Palermo win, they would still seal it that day if Napoli fail to beat injury-plagued Inter Milan in the late game.

If they do not wrap it up this weekend, they will still have three more chances to secure it.

Antonio Conte's side have not quite matched the consistency of last season, when they completed the championship without losing a game, but with 25 wins and only four defeats in 34 outings, they are quite clearly a cut above the rest.

Juventus, who have won their last seven league matches, have managed to keep the core of last season's side intact while 20-year-old midfielder Paul Pogba has been an impressive addition to the team since he was signed from Manchester United.

As last season, their new, compact and raucous stadium, nearly always full, is a stark contrast to the wind-swept rows of empty seats in some of Serie A's over-sized and run-down publicly owned arenas.

Napoli's challenge effectively ended at the start of March when they could only manage a 1-1 draw at home to Juventus during a rare dry spell for forward Edinson Cavani, the league's leading scorer with 23 goals.

"We've had a great season, with only a few bad games, but Juventus have done better," Napoli forward Marek Hamsik said in an interview with Sky Sports Italia.

"To make that jump in quality, we have to avoid messing up games the way we did against Sampdoria, Torino and Bologna."

Relegation-threatened Palermo have had an extraordinary season, yet, more by luck than judgment, seem to have stumbled on a formula that could yet earn them a reprieve under a coach they originally fired after three games of the season.

Giuseppe Sannino was dismissed by Zamparini in September and replaced by Gian Piero Gasperini, who lasted until early February when he was also sacked. That was the start of an extraordinary sequence of hiring and firing.

Alberto Malesani was handed the reins but was fired after three matches, then Gasperini was brought back and sacked after two games before Sannino was given another chance.

Incredibly, Sannino's return proved a success and Palermo are unbeaten in their last five games, enabling them to creep out of the relegation zone thanks to their head-to-head record against Genoa who are level with them on points.

The real battle is for third place and the Champions League play-off round spot.

AC Milan, at home to Torino on Sunday, are in third with